Leafing through a local news magazine touting summer excursions around town, including the environs around Seattle, I was highly intrigued by one article in particular. Life Of The Party by Warren Kagarise, says “In Seattle’s Fremont neighborhood and, for a time in Issaquah, Vladimir Lenin, so reviled and revered throughout the 20th century, is just the dictator next door.” Sitting at Fremont Place North and Evanston Avenue North sits a bronze replica of the once powerful ruler, a 16 foot tall, 8 ton, statue. I’m sure you’re wondering as I was…”What the h–k is a memorial honoring a former arch-enemy doing in our midst?” Well, I’ll tell you. It’s a long and winding road as to how Lenin came to be in the midst of a small, democratic community far from his native land.

“who was teaching English in Poprad, found the monumental statue lying in a scrapyard ready to be sold for the price of the bronze. In close collaboration with a local journalist and good friend, Tomas Fulopp, Carpenter approached the city officials with a claim that despite its current unpopularity, the sculpture was still a work of art worth preserving, and he offered to buy it for $13,000. After many bureaucratic hurdles, he finally signed a contract with the mayor on March 16, 1993.”

With the help of the statue’s Slovak Bulgarian sculptor, Emil Venkov, the statue was cut into three pieces which were shipped to Carpenter’s hometown. Much of the $41,000 shipping fee was financed through mortgaging his house. Unfortunately, “On February 18, 1994 in the midst of the uproar in Seattle that was set off by his import of a statue of a communist leader, Lewis Carpenter was killed in a car accident.  The statue, now part of his estate, was left lying in his backyard. The family contacted a local brass foundry, who offered to move it off the property.”

How and why did Lenin’s statue make it from rural Issaquah to Fremont, an urban neighborhood on the fringes of Seattle’s center? Enter Fine Arts Foundry owner and sculptor Peter Bevis. It was he who’d been asked to melt down the statue. Although he’d met Carpenter and Venkov when they toured the foundry in the early 90s, when the latter was searching “for a space to sculpt a proposed piece, nothing resulted from the appointment.” Bevis learned of Lenin’s statue from another sculptor. “Hey, I know this woman in Issaquah who has an 8-ton statue of Stalin, and could you melt it down or do something? She doesn’t know what to do with it.” Of course it turned out to be Lenin, toward whom Bevis felt more charitable since the communist leader had wanted some rights for his people, unlike Stalin whom Bevis felt “was just a thug.” Relocating the statue to Fremont cost Bevis $10,000.

Wanting to see this curiosity for ourselves, my husband and I drove into the city. Expecting to see a monstrosity which stood out like an eyesore, we were pleasantly surprised to see that Lenin’s statue blends in well with its downtown Fremont surroundings.

There’s a Bohemian feel to the area, or as my husband called it “the last of the hippy towns.” I was kinder, describing it as a “city with a small town feel.” According to the magazine article, “Fremonsters, a lable neighborhood denizens sometimes use, developed a grudging tolerance, if not outright acceptance, for the statue.” However, that wasn’t always the case.

“Some people said, ‘He was a murderer. He killed my family,’ ” Bevis recalled. …the statue induced strong and sometimes-unbridled emotions. Bevis received death threats after the installation.

“People also threatened me and said, ‘Well, we’re going to throw a rope around his neck and pull him over.’ Well, you see, in America we honor private property,” he said. “You can’t just go and destroy other people’s stuff.”

(The base is bolted down in order to prevent a coup d’etat in the neighborhood.)

From what my husband and I saw of Fremont today, the “welcome mat” is laid out for one and all. There were bicyclists, skateboarders, young couples sporting tattoos on their uncovered arms, a guy with a mohawk atop his bald head, teeny-tiny dogs and overweight ones tethered to leashes, proudly held by their owners, a black man in a suit laughing on his cell phone as he dined at an outdoor cafe, retirees out for their daily walk, a trio of giggling, young women eating mouthfuls of ice cream from waffle cones, an indulgence they looked to partake of daily. Since it was late in the day, about 6 p.m., the Sunday flea market vendors were breaking down their tents and displays.

That’s probably why we weren’t having to elbow our way through crowds of sightseers like ourselves. They’d probably all come and left before we got there. It was just as well. No one got in my way as I stopped to snap a photo of some detail that seemed so typical of funky, fun, freedom-loving Fremont.

In his adopted American hometown, Lenin let his “hair down,” as a

…backdrop for bare and jiggling bodies astride bicycles at the Fremont Fair, a summer solstice celebration. …is also festooned in lights for Christmas…(which) includes a radiant Star of David atop the statue as Santa Claus greets boys and girls at the base. Lenin, rather than leading to a glorious future, instead encourages peoples to patronize neighborhood merchants.

Fremont revels in such contradictions. The neighborhood embraces the statue, often in ways to spoof Lenin and communist politics.

The statue clutched a huge Winnie the Pooh toy for a time and, in a workers-of-the-world-unite moment, held a sign to support striking machinists. Celebrants doll up Lenin in drag queen makeup for the Fremont Fair and gay pride celebrations.

Kirby Lindsay, “a longtime Fremont resident and columnst behind the neighborhood news website, The Fremoncentrist” declares:

…lenin never looked better…i think i even saw him smiling…at his good fortune…hugmamma. 😉 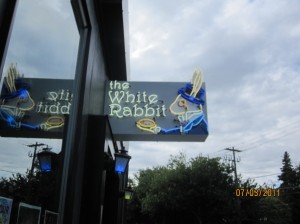 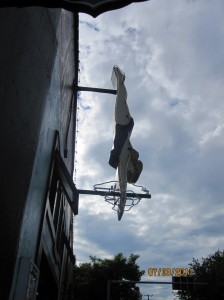 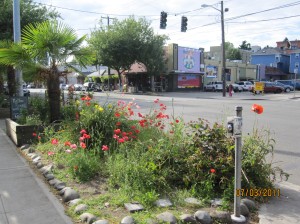