Are there people in your life who make you feel good…about you? Folks who greet you with huge smiles and hugs to match? Those who ask what you’ve been up to, and actually let you talk without interrupting? Even if the story is a lengthy one because you’ve not seen one another in nearly a year? Their faces registering sadness and joy at the appropriate moments? And do they gladly answer your “help wanted ads” for whatever it is you need?

My answer to all of the above is the dynamic duo of Ken and Leon. Friends of mine and my husband for more than a decade, these two came into my life when I was in need of support. The setting was an office party at the home of my husband’s new boss. I’m pretty sure, looking back almost 14 years ago, I was the only outsider in the group. The others worked together, and the few that didn’t, already knew everyone else. I was the odd person out. It didn’t help that my husband is somewhat shy, especially in unfamiliar social surroundings. I’m the social butterfly, but that night I felt more like a moth trying to find a lightbulb to which I could attach myself. I found one…in Ken and Leon.

Warm and friendly from the get-go, they hovered nearby. I don’t think they realized it, but I clung to them as though my life depended upon it. Obviously my husband was trying to make some headway of his own with his office peers and, of course, his boss. Not caring to be the proverbial wall flower, I mingled as best I could, but always found myself back beside Leon and Ken. They were my safety net then, and remain so to this day when we’re all at the same social functions.

I’ve written a couple other posts about these friends before, first in “foreign country, home?” on 8/25/10, and again in “putting a face on the unknown,” on 9/26/10. Ken and Leon bought a home in Marabella, Spain, a coastal town. I’d worried about their possibly retiring in a foreign country, far from the security of the American government. But when we chatted over dinner the other night, they assured us they’d already gotten into minor “pickles,” from which they extricated themselves just fine with the help of the U.S. Embassy and Spanish law enforcement officials. Putting my mind at ease, we agreed that it’s often the fear of the unknown that derails our efforts to expand our horizons. Anticipating what might, or could, happen can make me “gun shy.” I’m sure I’m not the only one.

Our friends are a gay, married couple, having “tied the knot” in Canada about 13 years ago, although they’ve been life partners for more than three decades. My husband and I joined them and other friends at a Human Rights Campaign fundraiser in Seattle last Fall. It was our first exposure to the organization, and its efforts to bring equality to a great number of disenfranchised, American citizens. As I surveyed the crowd of upstanding men and women, I couldn’t help but wonder about their parents. Whether supportive or not, their hearts must ache to see their children suffer at the hands of society. I’m a mother whose daughter was a miracle after 14 years of marriage. Whatever a child’s makeup…I can’t imagine abandoning it to a wolf pack to be raised… or worse.

And so I celebrate my dear friends, Leon and Ken, for not only accepting me for who I am, a housewife whose professional standing in the community has long since expired, but also for showing me what the “face of the unknown” in society…really looks like…folks not unlike…you and me. 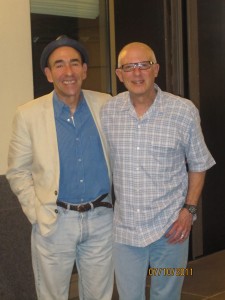