At least I aspire to be one of them. But with my recent spate of aches and pains…I’ll have a lot of catching up to do. I wonder if Tony Bennett, Betty White, and my mother-in-law for that matter, ever complain about stiffening, arthritic fingers, or lower back pain when bending over to wash their faces, or heartburn due to acid reflux? All we hear about Tony and Betty are how wonderfully they’re doing, considering their advanced ages. He’s 85; she’s in her 90s. And to think, they’re both headlining shows, Tony’s still performing on stage while Betty’s part of a winning foursome in Hot in Cleveland, a TV sitcom.

What’s their secret formula, their fountain of youth? Betty’s humor and “go with the flow” attitude probably serves her well. I loved her both as Sue Ann Nivens on The Mary Tyler Moore Show,

and as Rose Moreland on the Golden Girls. What I liked best about her characters was that they were the butt of everyone’s laughter. Sue Ann was a controlling bitch (no other word will suit), and Rose was a middle-aged, ditzy blonde. That Betty White took on these roles speaks to her ability to laugh at herself. Something we all should emulate, rather than thinking we are too good to take some tarnishing now and then. And yet, it’s for sure she is nobody’s doormat. Despite her acting characterizations, Betty doesn’t look like she’d put up with any nonsense. After all, before she played dizzy dames Betty was one-half of the brainy duo who created Password. 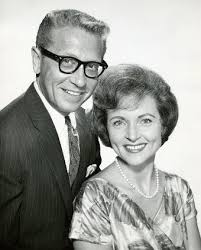 She and husband Allen Ludden ruled the airwaves long before Alex Trebek and Jeopardy. Gosh…am I showing my age…or what!?! 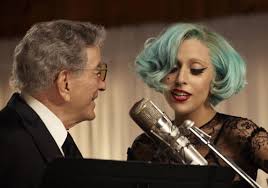 Thanksgiving Day? That she was fawning all over the senior crooner was flattering, albeit a little weird. I mean she looked like she was trying to seduce him. And I couldn’t tell what he was thinking behind his famous smile…or was it more of a grin…hmmm. They did sound great together, however, singing songs from our past…his and mine.

I must admit to finally warming to Lady Gaga…until I heard some of her own creations later in the show. One in memory of her grandfather was sweet, although it didn’t appeal to my middle-aged ears. Blame it on the generation gap, I guess. Now if she had only stuck to the oldies…

According to Christopher John Farley’s article “On the Horizon” in today’s Wall Street Journal, Tony is pursuing “artistic collaborations with Stevie Wonder and Lady Gaga.” Evidently Tony already has a hit on his hands with “Duets II” which went to number one on the Billboard 200 chart. No small potatoes that he also garnered 3 Grammy nominations to boot. How many other 85-year-olds alive today can say the same? By his side in the album was bosom buddy Lady Gaga, as well as a couple of other pretty, young things…Carrie Underwood, 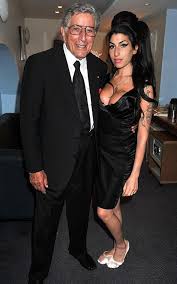 and Amy Winehouse, the 27-year-old British singer who died this summer.

Not only is Tony a celebrated singer, but he’s also an accomplished painter. In Vanity Fair’s January 2012 issue the elder statesman “is shown sketching a nude portrait of Lady Gaga, with the real Lady Gaga reclining disrobed nearby.” What must her grandfather be saying? “Oy vey!!! That #&%*@ is old enough to be me…before I died!” Maybe gramps will keep from turning over in his grave knowing that his grand-daughter’s likeness, “in all its Technicolor glory,” will be auctioned off on eBay, with the proceeds going towards charity.