Don’t know about you, but at 12:16 a.m. on 1/1/12 it was the same old, same old at my house. Hubby’s fast asleep on the couch, glasses perched on his nose, eyes shut tight, TV remote buried under the sofa pillows, and “zzzzzzzzz’s” lining up behind one another as they spill forth from a wide-open mouth.

And where am I? Typing away at my laptop, bleary-eyed, wanting to call it quits but unable to escape the words and thoughts that hold me captive…hour after hour after hour. I stopped blogging long enough to wake my husband, planting a loud kiss on his cheek while exclaiming, mostly to myself, “We’re missing the fireworks…New Year‘s! Wake up! Wake up!” Struggling to open his eyes, he asks for his robe, shivering as the programmed thermostat begins lowering the heat in our home. Of course I oblige after switching the channel to see the firework display re-broadcasted on the late news. As I fly down the hallway to the bedroom in search of my husband’s bathrobe, I stop midway to manually turn up the heat. You can take the girl off the island…but you can’t take the island out of the girl. 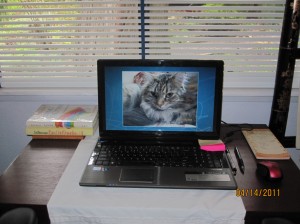 Returning to my writing nook…a desk in the corner of my daughter’s former bedroom…I hear the muffled sounds of singing, music, talking, clapping, and laughter wafting down the hallway from the TV in the living room. Faint snores can be heard drifting toward me as well. What a pair we make…a middle-aged man who can’t keep his eyes open…and his middle-aged wife who can’t close her eyes…at 1:07 a.m. New Year’s Day. The Chinese have a saying “Whatever you’re doing when the New Year begins is what you’ll be doing the rest of the year.” Can’t disagree with my wise, old ancestors.

Throughout this next year it’s guaranteed my husband will fall asleep in front of the TV, snoring. And it’s just as certain that most nights my eyes will be blinking back sleep as my head begins to nod, while my fingers flit  across the keyboard, jiving to some silent beat…willing me to keep writing. There’s no doubt that we’re creatures of habit. Aren’t we all?

We did make one change to our New Year’s Eve routine however. But you’ll have to wait to learn what it is…

…for i’m putting my foot down…and crawling into bed…and pulling the plug on my brain…goodnight!!!