Apart from the age difference, there’s a mental and physical fluidity that separates the generations. My daughter and I are living proof of that chasm. 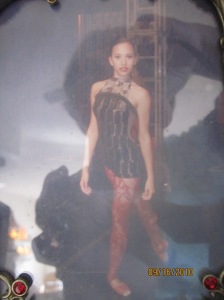 Today she’s enroute to a new life, or at least a modification of her normal one. At the invitation of a friend who created her own contemporary company, my daughter will be dancing with them for the next month. The pay is small, not even minimum wage. That she’s even being paid is amazing since the company is fledgling, at best just a year old. Donations and grants are sustaining the venture; passion and hard work are growing it by leaps and bounds.

My daughter made out better financially dancing with California’s University of Irvine’s program, the National Choreographer’s Initiative. For 3 weeks work, she was paid $2,000 plus partial airfare and pointe shoe costs. She was invited to return for a 4th summer, but had promised her friend she’d help with the effort to grow the newbie company. A promise is a promise, after all. And there’s always something new to be learned from unexplored turf. English: Modern pointe shoes. The edge of the toe pad, which is inserted between the foot and toe box for cushioning, can be seen on the right foot. (Photo credit: Wikipedia)

Despite glitches in my daughter’s flight with Delta due to mechanical problems, she was not deterred from the adventure that lay ahead. Even if it meant she had to return home, and begin the trip anew tomorrow. Her luggage might’ve made the trip ahead of her, but after all it only contained stuff. Thankfully, however, she’d stashed her pointe shoes in her carry-on bag. They are not easily replaced as they are hand made, and at a hefty price, with a lengthy ship date.

My husband and I were pleased to finally hear that our daughter and her luggage made a later flight, and is headed for some kick-butt fun.  She might’ve expressed it a tad differently, but after all I’m still a product of my generation and Catholic upbringing. I must admit though…there’s always been a little bit of the devil in me. Isn’t that an Irish trait? Well then they have something in common with us Hawaiians.

So while my daughter is off somewhere living a jet-setter‘s life, albeit on the salary of a starving artist, I’m living vicariously through my writing, my blogging. Easier on my back, although it’s questionable since I’m hunched over a keyboard for long stretches at a time. Less stress since there’s no packing or security lines involved. Not to mention delayed flights. I can use the restroom anytime, a luxury compared to sucking it up when I squeeze into the plane’s port-a-potty. I can eat at will. Not an advantage, more like a sin committed every half-an-hour or so. And no amount of confessing gets me the absolution I need…weight loss.

Energy and will power diminish with age. That’s my excuse. I reckon I’m not the only one hiding behind that one. At least I hope not. Wish I could rev up my engine and let loose like a ball shot from a canon. I won’t stop trying, but I won’t complain either.

Life is change and change is good. Adjusting to change takes work, but the rewards are pretty satisfying. So I’ll do my thing…

…and i’ll happily watch my daughter…do hers…

5 thoughts on “the flexibility of…youth”