What do those whirlybirds in the sky have to do with parenting? Well, according to those in the know…evidently self-proscribed experts on the matter…helicopter parenting applies to those of us who forever hover over our children seemingly to fashion all their decisions about…well…everything.

Some who know me, and some who don’t, might think I’m a helicopter parent. As they say…”sticks and stones…” Although I must confess…I’m not completely immune to hurtful words. However as I said to my daughter when some other child would say something unkind…”It’s her problem, not yours. She’s trying to put her unhappiness onto you.”

Folks insecure in themselves tend to insist that their’s is the only way.

I can only speak for myself and offer my experiences as guidelines that others might choose to utilize. But I’m no expert on someone else’s life, that’s for sure. I don’t know where they came from…and I don’t know where they’re going. I’m only a pit stop along the way. And as we all know, there are various and sundry other pit stops from which we can gain sustenance and momentary reprieve.

I’m not familiar with any helicopter parents, probably because my daughter has been living on the opposite side of the country from us the last 11 years. It’s rather difficult to hover from 3,000 miles. I’m sure I’d have crash landed by now.

Yes, my husband and I have offered our daughter advice on a whole host of topics…from drinking and driving…to being aware of her surroundings when she’s out alone at night. No, we haven’t told her who she should befriend or how she should spend her free time. We figure she’s learned by our example…and from what we’ve been saying since the day she could understand the English language. In other words…we’ve laid the foundation for what we hope is an upstanding citizen. Someone who cares about herself and others, and who shares her talents and abilities with her community.

I believe parents need to know who their children are, and toward that end need not be afraid to ask.

Having given birth to my child, I feel a basic responsibility for her well-being. No one else, other than her father, has that physical connection. Others may choose to be responsible for my daughter, but the obligation is mine and my husband’s. We brought this human being into the world, so we are charged with making sure she has a fighting chance at survival.

I cannot imprison my daughter in a bubble. I kid you not. Sometimes I wish it were that easy. I cannot physically safeguard her from the crazies of the world…the rapists…the kidnappers…the drunk-drivers…the manipulators…the screamers…the stupid boyfriends…and married men who hit on her. I wish I could pistol whip some of them! Not that I’d know how to hold a gun were I to get my hands on one.

Thankfully my daughter has grown very comfortably into her own skin. She listens very respectfully to what I might have to say…and does what feels organic for her. And I’m so grateful she does. As she’s aged she’s become the teacher…and I’ve become an unwitting…student. Funny, how the roles are often reversed between parents and children.

It might be said that my daughter is beginning to exhibit signs of a helicopter. She worries that if I fall at home…no one will hear me. So she’s thinking of getting me that device advertised on TV where the old woman who falls tells the person on the other end of the call…”Help! I’ve fallen and I can’t get up!“ 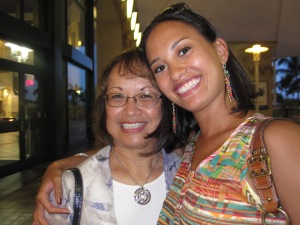