…mine would say “Couldn’t you tell I was in pain? You dummy you!”

About the time Mocha was diagnosed as having a leaky heart valve which causes fluid to accumulate, she seemed to go downhill rather quickly. She’d get out of her bed and plop down on the floor. A little later she’d get up and amble a short distance and…plop! She continued this pattern for days.

The vet had advised that Mocha rest as the spirit moved her. The way she behaved, it seemed her spirit wanted permanent bed rest. And every so often the thought of “putting her down” crawled through my mind. I hated to see her suffer so.

Mocha’s appetite never waned. And when she was outdoors, she seemed her old self.

As the days passed, her body seemed to shrink and lean to one side. She walked around looking lopsided. Her tail wagged less.

When Mocha started looking up at me with a very cynical stare…moreso than usual…I thought she’d had a stroke. She wouldn’t lift her chin, just her eyes. It was as though she was casting an evil eye on me. Spooky. After a couple of weeks, her neck seemed to disappear as she hunched her back.

“Poor, poor Mocha” I thought. As I stroked the length of her body, I’d murmur softly . “I know how you feel. I have arthritis. It’s no fun getting old. You’ll be alright. It’s okay. I love you.” The whole while she was probably thinking “You’re making it worse. Don’t touch me.”

I finally decided to get a second opinion, the vet’s, wondering if the end was in sight for my beloved, old pooch.

The assistant asked preliminary questions, all the while observing Mocha who paced, sometimes in circles, head cocked to one side. When the young woman asked if my dog was in pain, my eyes widened. Pain? That never even crossed my mind, especially since she never yelped when I held her, stroked her, walked her.

I hung onto the possibility that pain was indeed the culprit, as the assistant went to fetch the vet. “Mocha’s not dying! She’s just in pain.” Words that kept playing over and over in my brain.  I shivered at the thought that I had contemplated ending her life. OMG.

Lo and behold. The vet diagnosed Mocha as suffering extreme discomfort because of pain in her neck region. Evidently unlike people, dogs can’t turn their bodies to look from side to side. They’re kind of stuck if their necks are immobile. Worse, the sciatic nerve can also be affected, causing added pain.

Oye vay!!! It was like a wall of bricks fell on top of me. Pain, not heart disease was the reason for Mocha’s strange behavior.

If you’re like me, you bypass common sense and go straight to…worse case scenario!

A steroid shot and pain meds, and Mocha’s her old self again. Just old…not decrepit and on death’s doorstep. Thankfully, she has no memory of my idiocy… 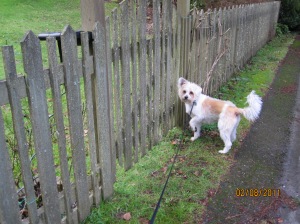