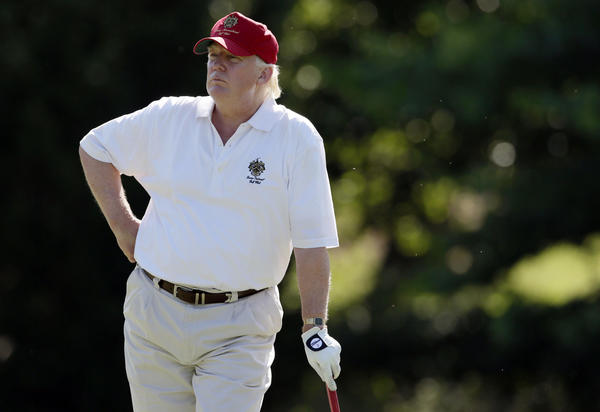 …that’s what Donald Trump wants. That’s what he says he’ll do if he doesn’t win. In this case I, for one, would love to give the man what he wants.

Trump rightfully deserves to be put out to graze. No one has worked harder at distorting the truth than The Donald himself. God bless him. He didn’t even break a sweat in his Goliath undertaking, unlike Marco Rubio who was drenched in his own sweat according to Trump.

Trump is to be admired for driving his own brand of rhetoric that had him circling roundabouts of his own making that had the experts tied up in knots, stumbling over their own tongues.

The presidential candidate will go down in history as having done it “his way” all the way. Move over Sinatra, Trump can sing those lyrics better than you any day of the week…and some.

If I had to choose a despot-in-the-making for the 21st century, Trump wins hands down every time. The man can twist himself into a pretzel better than any yoga practitioner on both sides of the ocean. Doesn’t matter that he always ends up lopsided, unable to stand tall in his Italian made shoes. The ones he has copied in China for U.S. consumption. Or is that his daughter Ivanka’s entrepeneurial expertise?

Trump supporters are smart to entrust him with their lives and all that they posess, for there is no one more adept at the “art of the deal” than The Donald. As he said “Nobody knows the system better than me. I alone can fix it.” He should know. He’s been gaming the system for decades.

While he adamantly refuses to release any of his taxes, those under audit and those already done, he and his surrogates proudly admit that he pays the least amount possible. You can bet he’ll find a way to write off all expenses to do with his presidential campaign. After all, if he loses why should he be stuck “holding the bag.” That’s what the taxpayers are for…including his ardent supporters. The ones he likes to refer to as “uneducated.”

The Donald and his cronies, like Carl Icahn…Trump’s pick for Treasury Secretary…are delighted to lead the “uneducated” towards “making America great again.” Icahn helped companies like TWA, where I worked in the early 80’s, reorganize so as to survive. Have any of you flown TWA lately? I didn’t think so.

I got pregnant so I missed all the “fun” when I decided to be a stay-at-home mom. My coworkers weren’t so lucky when Icahn sold off lucrative pieces of TWA, and let the rest of the company sink into oblivion. Icahn is now worth $17 billion. Following are some of what he believes…

Anyone that makes me a quarter of a billion dollars, I like.
When you have no one to answer to, vendetta as investment strategy is as legitimate as anything.
You learn in this business: It you want a friend, get a dog.
My wife watches me like a hawk.
I’m a cynic about corporate democracy and boards.

(photo…channelnewsasia.com)
It could be that Trump considers Icahn a mentor, not just a friend. As for Icahn’s take on The Donald? “If you want a friend, get a dog.” Icahn’s words; not mine.
And in Trump’s own words…

Part of being a winner is knowing when enough is enough. Sometimes you have to give up the fight and walk away, and move on to something that’s more productive.

I vote we retire Trump, at 70 years of age, to his palatial, D.C. Mar-A-Lago on Pennsylvania Ave. The man needs to catch up on some serious sleep, and be allowed to capitalize on his run for the presidency. I can already see his brain going…