…as long as there’s a child…longing to be loved…and hugged.

(To hear the beautiful music that accompanies these lovely photographs, go to… https://passiondew.wordpress.com/2015/05/10/for-you-mama/)

Another pet will probably be leaving us soon.

Sitka…who thinks he’s a lap dog…not a “leave me to my own devices” feline. If he could attach himself to my body…or anyone’s for that matter…he would. His life is intricately intertwined with his humans. He doesn’t want to be anywhere except with us. If he could curl up around our necks and live there, only uncurling himself to eat and do “his business,” he would.

Sitka’s nearly 14…a long life in cat years. Not long enough for him, I’m sure. He’ll always be young at heart, living the carefree life of the youngster he most assuredly thinks he is. Always reaching up the length of my body to be carried…to be snuggled…to be loved like a child.

Sitka, who could never get enough love it seems. Makes me wonder what his life before 8 weeks had been like. I adopted him, and his sibling Juneau, from the local animal shelter around that time. It was the day after 9/11. They were my own personal homage to lives lost on that horrific day. Diagnosed as having “worms,” I had to keep them apart from my two other cats so they wouldn’t contract the disease.

For a month Sitka and Juneau lived in our downstairs bathroom, much to their dislike. Every day I had to scrub down the floors, counter tops, toilet, shower stall and sink with disinfectant so that the cats would not reinfect themselves with those nasty little buggers. Every day I had to spend quality time with them closed off from the rest of the family, assuring my little boys that they were loved. Every day they tried to rip the door off its hinges…literally…in an effort to escape solitary confinement. Once my husband even had to take the door off its hinges. The boys had pulled out a drawer of the cabinet so that we couldn’t even open the door. Funny now. Sheer pandemonium then.

When we moved to Washington in 1998, we brought along 2 cats…sisters, Fudgie and Sunkist. After 9/11, Sitka and Juneau joined the family. A few years later our dear Mocha ruled the roost as the only dog. They all figured out how to make the most of their living arrangements.

Being the least inclined to follow anyone’s lead, Sunkist was the grand dame. Fudgie seemed to shrink from contact, preferring to hover nearby instead. Sitka, the friendliest of the bunch, wanted to be pals all around. Juneau preferred to body-slam his affection, especially with Mocha who tolerated, sometimes even tussling with his unlikely opponent. Once we had to reprimand Mocha for dragging Juneau a few inches by the scruff of his neck, as well as scold Juneau for making a nuisance of himself with Mocha.

When grandkitty Misha came home with his mom, our daughter, to vacation or, on occasion, to spend several months…or a year, the house would be in an uproar. Misha usually flounced his weight around, gaining the upper paw by sheer magnetism and charisma. He is one cat who doesn’t cotton to occupying the lower rung on any ladder, animal or human. As with the others, he soon learned that grammy…me…was the predominant alpha. Once he learned that golden rule…Misha settled in just fine with the others. Oh, he still drove me up the walls…splashing water all over the place in an effort to clean himself off while drinking water. We went through several innovative concoctions, not to mention types of water bowls, to save the wood floors from being drenched and eventually warping. Now that he’s happily settled in with his mom again, she has that headache with which to contend. And I can return to carrying on about what a cute, little grandkitty he is…from 3,000 miles away. Although I do love him as much as my own boys.

Sitka’s blood platelet count has been descending rapidly…for some unknown reason, it seems. The vet, a compassionate man who has doctored to Sitka’s needs since he was 8 weeks old, suspects cancer. In an effort to stabilize and even elevate his blood count, the doctor is trying every and all medication he can think of to turn things around for our little fella. In the end, however, it is about quality of life. I never want any of our pets to suffer for our sake. Once we become aware that they are struggling to hang on…it’s time to let go…and remember them during the best of times.

By the end of the week our little man might be gone…joining siblings Sunkist, Fudgie, Mocha and even earlier family members, Sushi our Shitsu and Bandit our Persian,(and many others before that for there was never a time I was without pets.)

I still have all their ashes…in little, floral tins provided by the crematoriums. One day I will spread them out in the garden so that they will be remembered year round as I wander about…among the flowers…the fallen leaves…the light dusting of snow.

…remembering those who love us…unconditionally. 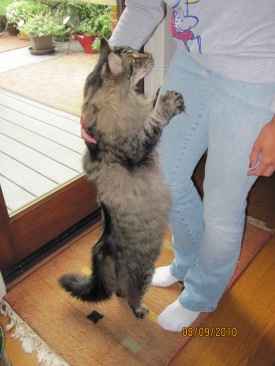 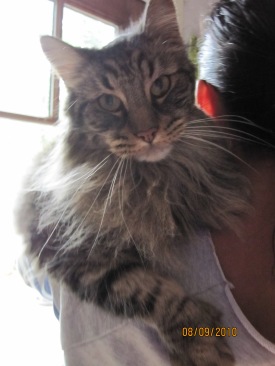 (Move your cursor over each photo to read captions.)

Good advice from someone more than half my age.

Whoever said this next generation is self-absorbed hasn’t met Roshan or others like him.

Given half the chance…these young ‘uns might save the earth…in spite of mankind.
………hugmamma.

Forgot to mention grampy’s contribution to the tale of our woebegone grandkitty.

The kennel in which grandkitty had his smelly accident was exiled to the balcony. And thank goodness there was one.

Imagine spending the night in a studio…albeit an over-sized one…with no windows to open, and a sliding glass door that remained closed for the sake of security, not to mention the cold.

I would probably have slept at the furthest point away from the crate. Maybe standing up in the shower after I’d scrubbed it thoroughly…top to bottom. Me and grandkitty hiding out…with the bathroom door shut tight.

Fine for me anyway, seeing as how I “go potty”…while everyone else dozes.

Grandkitty’s crate would have been history if I had my way.

Not one to shrink from a challenge, grampy decided he’d save it…somehow.

“Good luck”  I thought. Removing every piece of stuck poop would be some trick.

Lo and behold after moving to our daughter’s apartment, and after the movers had unloaded all her furnishings and left…grampy set about cleaning the cat crate.

Removing the pieces ever so carefully so as not to drop any poop, grampy took some kind of brush and scraped off all kinds of “unmentionables.” (I would have barfed for sure.) And then he took the pieces down to the basement laundry and ran them through one of the commercial washing machines.

I don’t think grandkitty’s been back in it yet, since he’s not been on a plane since that unfortunate, never-to-be-forgotten event.

“Chewing my toes is more exciting.”

“And you’ll never get me on a plane again!”

My daughter sent along this photo of my grandkitty, a little fella who tugs at my heartstrings every time I see him…in person…or in print.

I think he’s trying to tell his mom that he misses me…his blogging hug-grammy.

And that she’d better get him on a plane headed this way…quickly!

Even though the last time we all flew to take he and his mom back to where they lived…he pooped in his crate.

Having rented a condo for a couple of nights until our daughter’s apartment was ready for her to move into, she and I had to bathe my poor, miserable grandkitty in the shower.

Imagine a cat with water pouring down from high above, while two humans he thought cherished him scrubbed every nook and cranny of his body unmercifully. Well, it was more like my daughter holding him, while I did all the pulling, tugging, and scrubbing…making sure not a smidge of feces was left in his long hair.

So then we had to leave him holed up in the bathroom so that anything I hadn’t manage to scrub off…didn’t smear off onto the condo furnishings.

Although the night before, I did insist we buy a little, soft fabric house in which he could hunker down and hide. And that’s where he remained until we felt it was safe for him to join us in the rest of the over-sized studio.

Of course I had packed his litter box, some litter, the poop scoop, and some food…wet and dry…in my suitcase. So he was good to go…kind of.

As you can see, the “little man” has acclimated to his home of less than a year quite nicely. In fact, he’s back to his ornery self.

…no doubt about it.

(Move your “mouse” across each photo to read the caption.)

“Busted out of prison. Finally!” 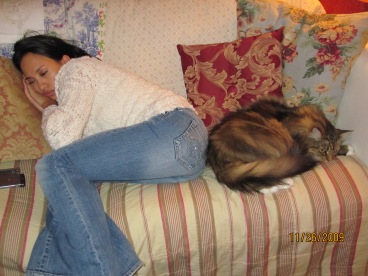 “What you staring at?” 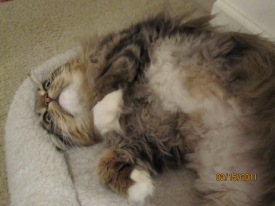 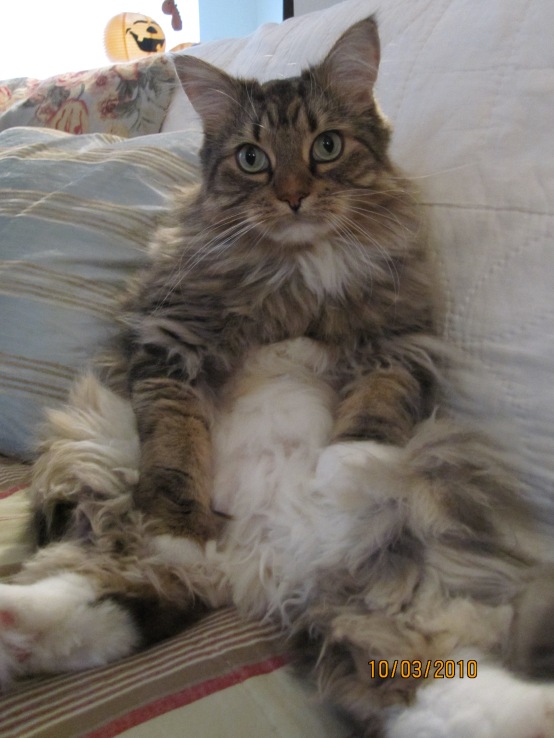 “Sometimes I just like to sit on…my fat behind.”

(Go to the following for other…PET SHARES by MICHELLE
https://hopethehappyhugger.wordpress.com/2015/01/27/weekly-pet-share-round-up-and-start-of-new-week-73/

Remodeling spaces is a form of art.

Could it be that Picasso dabbled in fixer-uppers before painting anatomically grotesque women?

An artist begins with a blank canvas. So it is when I behold the before…imagining in my mind’s eye what will come after.

While I do not strike the carpenter’s hammer or turn the plumber’s screwdriver, mine is the creative vision.

The inspiration. The design. The materials. The textures. The colors.

My aesthetics power the coalescence of the parts.

And when it comes to details…I’m the devil.

Never for symmetry, instead by gut instinct.

If it feels right…IT’S MAGIC! 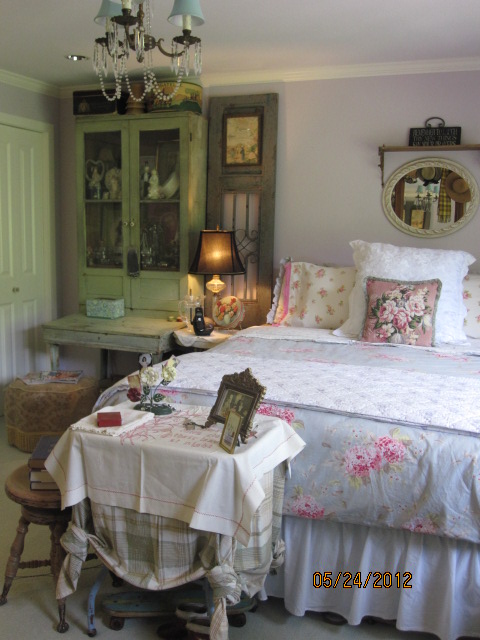 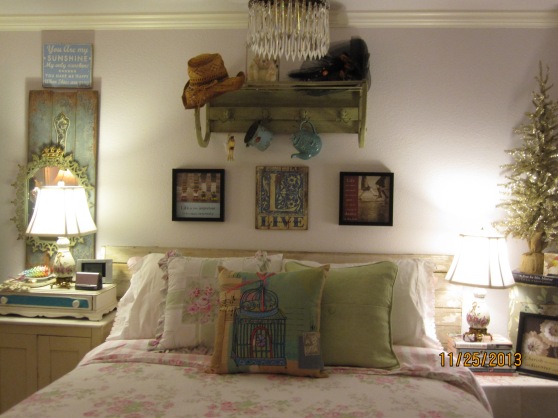 Her post reminded me of my own pets Mocha and Sitka. I guess it’s true that when it comes to canines and felines…kitties have the upper hand…or so they like to think. Is it fearlessness, egoism, or…just plain ignorance?

Meanwhile, as my kitties demonstrate…blood is thicker than water. Brothers Sitka and Juneau have no problem sharing tight quarters. On the other hand, when Sunkist was still with us, she made no bones about her displeasure at sharing HER space with Sitka.

We had a DIALOGUE, squirrel and me. I said “Get out!” He replied “Make me!” To which he added…”BTW, have you had your rabies shot?”

“Delicious! Best I’ve ever tasted.” proclaimed my host, the Emperor of Japan.

I almost puked just looking at those frothy, deep-fried, tempura caterpillars and their egg sacks. Yet the media would have had a ball with the diplomatic backlash.

My brain went into overdrive trying to concoct some way of getting out of the pickle in which I found myself. I’d even trade these delicacies for a bottle of those nasty dills  my mother-in-law bottled and sent us every month.

And then, all eyes were on my cleavage where insects and dribble had settled.

Exactly where here was, I couldn’t say.

I only knew that I had been very happy. I had belonged. It had been home.

Was it a memory…or just a dream?

Perhaps I was playing at make-believe.

Others were with me. I was not alone.

They were fussing and fawning, bowing and curtsying.

Torrential rains shut out the sun.

I grew in light and beauty…the darkness retreated.

My island paradise. My people. My Maui.

At last…I am home. 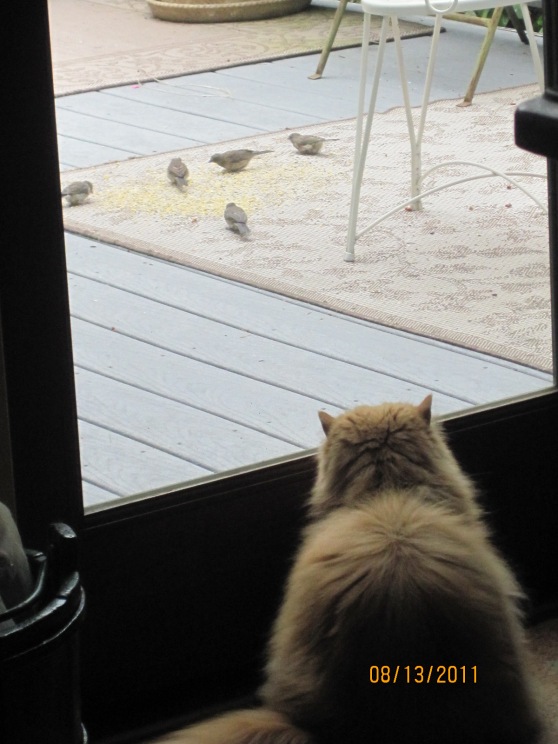 NOTE: Check out the full post about Ireland’s Dark Hedges at the following site…