You know how I can tell that President Obama is Hawaiian? He hugs, a lot.

And by osmosis, Michelle’s Hawaiian too. She hugs as much as her husband, but hangs onto the recipient a bit longer.

I’ve noticed this before, but while watching one newscast of the Tucson memorial for victims of the recent shooting, I carefully observed Obama and his wife as they made their way through the throngs of well-wishers. Their hugs were infused with the “aloha” of the islands.

Growing up Hawaiian, hugging a person as a welcoming gesture, or a parting one, was like drawing breath. Moving forward into someone’s space is akin to bringing him or her into mine. The sensation of bodies touching in “aloha” is pleasant, heart-warming. My guard is down, my mind is open. I want to share the best of me, my “better angels,” as coined by Lincoln in his first inaugural address in 1861. I wish I could rattle off a Hawaiian phrase that would capture the essence of what I mean. Could it be “hoomalemale?” I’m not sure. My mom would have uttered a paragraph of native speak by now. I’ll have to google my ancestral tongue. Come to think of it, I’ve a Hawaiian dictionary somewhere in my house. I’ll post a blog in Hawaiian when I find the book. (Just don’t hold your breath.)

Perhaps because my mom was a native Hawaiian, full-blooded, she came by hugging naturally. And because of her, so did I. Unless I feel a strong vibe from someone, I automatically pull them into a huge hug. Friend or stranger, peon or dignitary, working stiff or corporate CEO, my hugs are the same. I connect on the most basic of human levels, one person reaching out to touch another’s soul in compassion. If I was asked what I liked best about myself, my propensity to hug, everyone, would be my answer.

Until my father-in-law suffered a massive heart attack more than two decades ago, my husband and his family weren’t publicly affectionate. They’ve always been the model of Christian generosity, sharing their home with everyone, making all feel like “ohana,” family. But huggers, not so much. All that seemed to change after my father-in-law was stricken. Not only were hugs given more freely, but saying “I love you” to one another before hanging up the phone has become commonplace. That’s always their reply to me, when I tell them “I love you.”

I’ve even taken to telling friends “I love you.” I think it’s taken them aback. Not all reply in kind. No matter, if I feel like saying it, I say it. I understand that there are differences in culture, and in upbringing. My Brit friend, Sylvia, however, always tells me “I love you” back. I think that’s because she thinks of me like a daughter. Something she once told me. So I make sure I tell her that I love her, like a daughter. One can never have too many mothers, or daughters.

My husband’s definitely grown in displays of affection over the 40 years we’ve been married. He’s had no choice. I’m a relentless hugger, and “masher.” That’s another thing my mom taught me, how to “mash.” She’d smother me with hugs and kisses before I was even awake to appreciate them. At the time, I found her “mashing” a nuisance. I’m sure that’s what my husband and daughter felt at the beginning. Now, they’re resigned to it. But as I’ve aged, I’ve cooled it some. I think good “mashing” requires energy, the kind I still had through the early part of my 50s. Now, I just hug a lot. And I’m so blessed that my daughter’s a big hugger too! 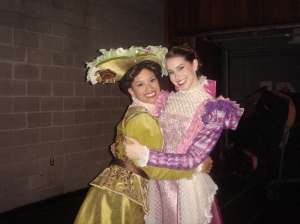 That’s my legacy to her, and to future generations of our family.

Maybe we should become a nation of huggers. It’s impossible to hate someone you hug. Hugging slips the switch from distrust, to possibility. Hugging opens you up to listening. Hugging is positive, not negative, energy. Hugging welcomes you like “ohana.” And in God’s eyes, aren’t we all family? We should be, let’s all hug…

sending huge hugs to all of you, my global “ohana”…hugmamma.