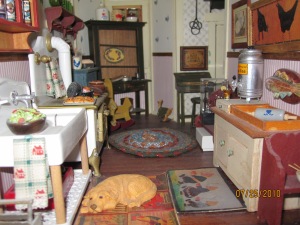 When we moved from the east coast 13 years ago, we practiced a little “hocus pocus” when selling our home in Redding, Connecticut. One of the smallest houses in town, our 100-year-old Victorian farmhouse, at 1,500 square feet, was about half the size of our current one. While it lacked an abundance of living space, our 3 bedroom, 1 bath home was full to overflowing with charm. It provided the perfect backdrop for my collection of antiques and memorabilia. But when it was time to sell, we weren’t sure prospective buyers would love our one-of-a-kind, vintage home.

My husband left my young daughter and me before Christmas, to begin his new job here in the Pacific Northwest. I was anxious to sell quickly so that we could all be reunited. Just before he returned to spend the holiday with us, I learned from a friend that a neighbor and friend of hers had just died of a heart attack at age 42. The loss was especially devastating because she left behind two very young daughters, the littler of whom wore a helmet because she suffered some neurological disorder. The husband owned a local ice cream shop in a town next door to ours. Evidently their marriage had been strained because he was very controlling of his wife’s time, and her friendships.

I was so saddened for the little girls who were now without a mom, that the sale of our house seemed inconsequential. Instead of praying for our family’s reunion, I prayed hard that the children would be okay. I cried that they would be okay.

When my thoughts returned to the sale of our home, a dear friend, Carol, offered some unusual advice. While it seemed like religious superstition, we were open to anything after 2 months without a firm offer. In the dead of winter, we buried a small statue of St.  Joseph, head first, facing the street, in the dirt in front of our house. Needless to say my husband had a difficult time digging a hole in the frozen ground. But he did. And guess what? Our home went into contract later that week! We had bought it 14 or 15 years earlier for $115,000, and sold it for $245,000. When we moved, St. Joseph traveled with us. We had to dig up his statue and honor him with a place in our new home, which we have. He stands among my collectible dishware in a red, painted cupboard. 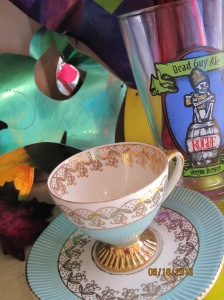 With foreclosures on the rise recently, sellers and buyers “are turning to witches, psychics, priests and feng shui consultants, among others, to bless or exorcise dwellings,” or “to help move…property stuck  on the market.” The Wall Street Journal’s “The Housing Slump Has Salem  On a Witch Hunt Again,” indicates that the ancient tradition of housecleansing is making a comeback. Tony Barletta bought a foreclosed home in disrepair at 31 Arbella St. Because of its bad vibes, he invited 70-year-old witch, Lori Bruno, who claims to be descended from 16th century Italian witches, and warlock Christian Day to process through the house casting out the negativity. “They clanged bells and sprayed holy water, poured kosher salt on doorways and raised iron swords at windows.” Then Ms. Bruno chanted ” ‘Residue, residue, residue is in this house. It has to come out,” and “Lord of fire, lord flame, blessed be thy holy name…All negativity must be gone!’ ” The bell ringing is to break up the negativity, while the iron sword keeps evil spirits at bay, according to Bruno and Day.

Historically, Catholics and Hindus call upon priests to bless a new home before occupying it. Chinese believe in cleansing a home of any accumulated bad luck before the start of their New Year. Julie Belmont, a so-called “intuitive,” working in Orange County, California, explains that with foreclosures, ” ‘It’s not dealing with entities or ghosts…anymore…a lot of it is energy imprints from past discussions, arguments, money problems. All of that is absorbed by the house.’ “

But while Ms. Bruno and fellow Salem witch Lillee Allee perform house blessings for free because they “don’t want to live off people’s sadness,” others see it as a real business opportunity. “Austin, Texas-based feng shui consultant Logynn B. Northrip is teaming up with Scottsdale, Ariz., real-estate agent Jason Goldberg to offer a package of services to create better vibes in a home, either before sale or after purchase. The two met at a yoga retreat.” Sacramento, California realtor Tamara Dorris used feng shui to help sell a home that had sat on the market for more than a year. Having placed “a jade plant, believed to bring financial good luck, in a ‘prosperity corner’,” the home received 2 offers of purchase within two weeks.

Seems to me like St. Joseph is a more budget-friendly investment, and reeks less of superstitious mumbo-jumbo. But as far as I’m concerned, hey, whatever works!