Had to share this Friday Fictioneers piece. A mind-bender for sure…at least for this often clueless senior…
………hugmamma.

Malcolm and Mildred had lived here for years. At first just a house, they’d eventually made it their home.

Mildred was pregnant, and if history (and the size of her tummy) were anything to go by, she was pregnant with septuplets. At this stage in proceedings Malcolm had taken on the role of hunter-gatherer. Every morning he’d be up early scratching around, looking for items that would sustain his ever-growing family. Lately things had been quiet. Times were tough.

Jason and Joy had lived here for years. At first it was their home, but the rat problem had become intolerable.

This piece was submitted as part of Friday Fictioneers, hosted by Rochelle Wisoff-Fields. 1 photograph. 100 words. Over 120 people taking part. And hey, if you still can’t get enough – why not check out my almost-FREE eBook, People Watching. US link here, UK link there.

Reality shows, like biographies, fascinate me. They provide insight into real lives, real people. Fiction doesn’t captivate me the way non-fiction does.

I like to know what makes people, flesh-and-blood human beings like me, tick. Just as I don’t always know why I do what I do, it comforts me to know that I’m not the only one floundering around for answers.

Of course I can more readily identify with some reality show characters, and definitely not with others…like New Jersey housewife, Teresa Giudice. OMG! That woman needs to be locked up in a room with mirrored walls. She needs to take a long, hard look at herself. Maybe then she’ll find release from her permanent state of denial.

I’m more interested in author J.K. Rowlings than in her blockbuster series of books about HARRY POTTER. I can’t get past the fact that she was living in poverty while writing her mega-hit. God bless her!…is all I can say. God bless her! She deserves the life she now enjoys.

HGTV is one of my go-to channels, just as the FOOD Network is my daughter’s, and the HISTORY Channel is my husband’s. However, we have no problem sitting down to watch one another’s favorites. No problem at all. Thank goodness!

One reality show I happened upon while surfing the channels one day was home remodeling as a form of therapy. The designer/host is Jeff Lewis. He’s not my favorite TV personality because he’s pretty arrogant and condescending toward others. Unfortunately his attitude seems to be a huge defense mechanism. He looks as though he needs someone to give him a great big bear hug, and never, never let go. That’s how emotionally needy he seems to me. Although I’m certain he would never admit it.

How is it possible then that Jeff can dole out personal advice which gets homeowners out of the rut they’re in, so they can move on with their lives? I’m always amazed that his abrasive, “in-your-face,” hold nothing back, confrontational manner gets the right results…and the long-hoped for happy ending. EXCEPT. I repeat…EXCEPT that Jeff’s designs are always spot on.

It’s very likely that the new environment Jeff creates for his clients enables them to look at life with fresh eyes.

A recent example of Jeff’s success was with a couple who were most certainly headed to divorce court because of cats. Yes! Cats! Seven cats to be exact. 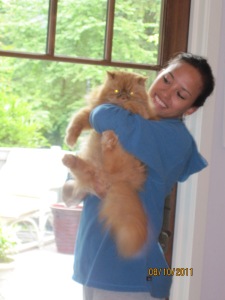 Our daughter’s inherited my love of cats. Here she’s with Sunkist who has since gone to join her sister Fudgie in heaven. We still think of them.

Now I love cats.  Always have. My husband, on the other hand, never grew up with pets. Probably because there were 12 children in his family…more than enough mouths to feed without adding a few furry ones to the mix. Four decades later, and more than a dozen cats adopted into our household during that time, our marriage has never come close to imploding because of our feline children. In fact, my husband now calls our dog…our daughter, our 2 cats…our boys, and our daughter’s cat,…our grandkitty. Actually, he calls them MY daughter, MY sons, and MY grandkitty. In turn, I call them HIS. Whatever! They’re ours. 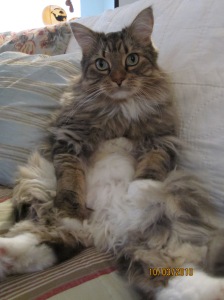 Anyway, getting back to the reality show…

The reason the homeowners have 7 cats is that the wife has made it her mission in life to rescue abandoned cats. Those for whom she wasn’t able to find homes ended up in hers. According to her husband, his wife’s compassion for the poor animals was what he found attractive. That is until the cats took over their house, including the master bedroom…and the family’s life. The clincher for interior designer Jeff in his determination to right the wrong he saw in this situation, was that the couple’s infant son was allergic to the cats. Viewers witnessed the child’s breathing from an oxygen tank after an episodic reaction.

With the help of a rep from the local Humane Society and Jeff’s makeover in the garage where the cats would languish in the luxury of a space that was all their own, the wife was able to let go of her obsession and refocus her attention upon her human family.

Throughout the show I could see how, over time, a person’s obsession with something, could totally overtake his life…to the exclusion of everything and everyone. An intervention seems necessary to pull that person back from the brink of falling off the cliff, mentally and physically. What form that intervention takes needs to be confrontational AND rewarding. The person needs to be able to give up something to get something he wants even more.

Jeff was able to get his client to give up 3 of her cats, house the remainder in a comfortable environment for them and the family, and help her return to putting her son’s health, and her husband and 2 daughters…first.

…who said change was easy?…but it can be sooo worth it! 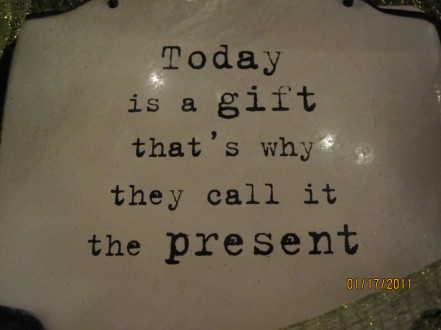 …time has its moments…cherish each and every one…