On a cruise of the British Isles last Fall, the Queen Mary II was hailed with majestic fireworks while anchored in Liverpool. Lucky us, we had a ringside seat.  There’s nothing like the movement of explosive sparks of fire as they hang suspended…disappearing from sight shortly thereafter.

Visiting other blogs this morning has proven to be a treasure chest of wonderful discoveries.

A Year In The Life at http://ayearinmyshoes.wordpress.com posted photos of Kinsale. I’d forgotten about that quaint, fishing village in Ireland. When we were there in September, I think I walked around with my mouth open the entire time…oohhing and aahhing. I hope the pictures I took will put a smile on your face.

From the quiet isolation of my cabin’s veranda on the Queen Mary II, I was indeed lucky to glimpse the setting sun make its slow descent into the vast ocean beyond. I felt special, bearing witness to the magnificence and grandeur of the sun as it traveled on…bringing the dawn of a new day to another part of the world.

One of our greatest pleasures while sailing on the Queen Mary II to France and the UK, was meeting Scots Michael and Jackie, and South Carolinians John and Kathy. To say that we lucked out in our choice of dining companions is understating the fact. From the get-go we all fell into an easy, comfortable camaraderie. How amazing is that? 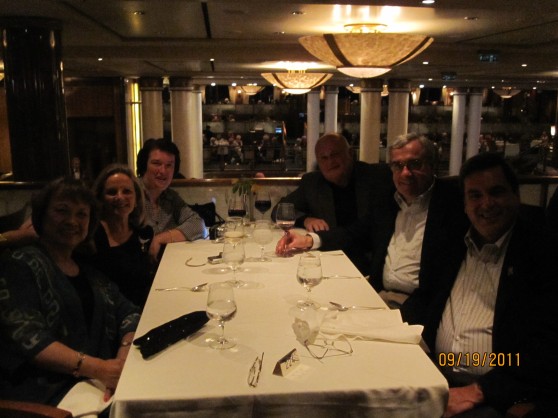 Accents abound as we six engaged in active conversation. No shrinking violets, we. Amidst the yada, yada, yada, and the blah, blah, blah, there were laughs galore. I took to teasing Michael about “tieing the knot” with his beloved Jackie. And chided John for being the “red-neck” he proclaimed himself to be. All in good fun; all in good humor. Both were gentlemen, for they didn’t haul off and smack me upside the head for my witticisms.

The ladies were sweeties. Soul sisters with heart, we got along swimmingly. Great news, in case we had to jump ship. Of the three, I was the only one still wedded to the same man. Not that it mattered, for the others seemed smitten with mates with whom they were meant to be. Near our age, they were great role models of relationships that work outside of Holy Matrimony. Proof-positive that one size doesn’t have to fit all!

We learned that Michael only ate beef…not poultry, not pork, not fish. We discovered that Jackie’s 20ish-year-old daughter had recently moved to Australia. Or was it New Zealand? And because she feared flying, Jackie was trying to figure a way to cruise to see her daughter “down under.”

Together Michael and Jackie had sailed the Queen Mary II 8 times, and been on more than 30 cruises. When we docked in Scotland, they remained on the ship luxuriating in all it had to offer, while most of us mucked about in the wind and rain trying to see what they could see whenever they wished. Lucky, lucky them, not to have to rush about like chickens with our heads cut off trying to squeeze Scotland into a few hours of viewing pleasure.

John and Kathy made me think that southerners have healthy egos. They speak their minds, very eloquently. Right or wrong, they hold forth on their opinions. Not the least bit shy, they spoke of their dislike for Obama. Not until our last night together did Kathy ask how I felt about our President. I said I liked him. And that was that. No debate ensued as to our difference of opinions. She and John were probably the first people I’d ever met whom I liked immensely, despite their having proudly declared themselves to be die-hard Republican Conservatives, and ardent devotees of the Fox News Channel. They didn’t try to sell me their bill of goods, and that was more than alright with me.

John was a teddy bear disguised as a “red-neck.” He admitted to letting 2 ex-wives walk away with nearly everything. He just wanted out. Obviouslyly crazy about Kathy, John is great friends with her ex-husband, who blesses the relationship between his ex-wife and his good friend. Go figure! Must be southern hospitality at its best.

Kathy, an avid antiques collector and dealer, has acted in several movies that were filmed in her hometown of Buford…The Big Chill, and The Prince of Tides, starring Nick Nolte and Barbra Streisand. In the latter, Kathy played one of Barbra’s girlfriends. Evidently the great Streisand is a very nice person to be around…not diva-ish at all. So too it seems is Tom Hanks, whose film Forrest Gump was also made in and around Buford. Looks like small, southern towns are where the Hollywood celebrities feel most at home. After meeting John and Kathy, I can see why.

I hope we run into our shipmates again, whether on their home turf or ours. It’s obvious that when we allow ourselves to open up to one another, beautiful things can, and do, happen. Whether via the Internet, or sailing the ocean blue…

friends truly are…wherever you find them…