My life has been enriched by friends I’ve met through hugmamma’s mind, body, and soul.

We share our stories, stories told by others…our lives…and those of others. All are compelling.

…i‘ll let the video speak for itself…

Spent a couple of hours Saturday evening volunteering once again at the community hall serving dinner to those who wandered in from the street. My husband and I decided to fill in wherever needed, rather than commit to a regular schedule. As with most who offer their time, it’ll probably work out to be once-a-month that I prepare a dish that we bring along for the meal.

While 2 or 3 of the women are there more often because they coordinate the effort, others like us are there now and then. As for the needy, most seem to be regulars who are familiar with the routine. They’re very respectful as they enter the hall. Early by about 15-20 minutes, the men and women mill about, settling into chairs while they wait. If dessert is set out some might help themselves to a little, probably too hungry to wait, while others wander about aimlessly, perhaps too antsy, and hungry, to sit still.

The woman-in-charge was delayed, so we waited until she arrived to serve up dinner. We didn’t know where the second pan of meat loaf and a side dish of cauliflower were, or if they’d even been delivered. The coordinator arrived, the food was found warming in the oven, and the meal was ready. Meanwhile, the diners had lined up along one side of the hall, patiently waiting to be invited to step up and be served. I served the meatloaf, another woman served the risotto dish she’d made, a middle-school boy helped with the tomato/mozzarella salad with balsamic vinaigrette I’d assembled, while his mom served up an ambrosia fruit salad. The diners helped themselves to garlic bread and the dessert of homemade strawberry shortcake.

There were a couple of newcomers that made me reflect. One was a young boy about 15 years old, I think. He looked as though he’d not bathed in a while, his hair disheveled, his face streaked with dirt, his ti-shirt and pants wrinkled and perhaps a little smelly. He arrived late, quietly approached the table, and mumbled that he was starving. My mother’s heart quickly sprang into action, offering him a couple of helpings of meatloaf, huge servings of mashed potatoes and risotto, and several slices of the tomato/mozzarella salad. He also got a spoonful of the cauliflower dish from another volunteer.The boy accepted everything gratefully, as they all do. Of course they may not like everything, but they’re not forced to eat it all. Later I did see the young man very discreetly throw out what remained on his plate, including the tomatoes and cheese. I felt for him as he stood at the  trash bin, seeming unsure as to whether or not he should discard the food given him. I think he did, finally. I’m glad. Just because he’s destitute, doesn’t mean he’s not free to still choose. My husband said he’d encountered the boy as he neared the hall. Standing outside until he could be useful, my husband informed the boy who asked what time it was, that, in fact, a meal was being served for any who desired to partake. My husband was also touched to see such a young person obviously in need of something to eat.

Late into the meal, a mother pushing a stroller arrived, accompanied by a younger relative carrying the baby. We had to scrape together what remained of the food, except for the salad of which there was lots left since I’d brought 3 platters. The latecomers seemed happy to be getting whatever they could. They, and the others, are a reminder that there are those who will eat anything, rather than have nothing whatsoever to eat.

As he did the last time we volunteered, my husband got to work scrubbing what serving dishes were emptied of food. Most had been cooked in disposable aluminum foil pans which were tossed, so there was less to clean up than before. As a result we left earlier than others who remained behind chatting. In taking our leave, we agreed that it was another evening well spent at the community hall. It felt especially good since we were celebrating Easter the following day. Feeding the hungry meant we were doing what Christ had done.

While in Seattle yesterday I was lucky to find one of my favorite reads, a street newspaper. Since learning about this network of national, even global, homeless newspapers, I make it a point to seek out its vendors wherever I travel. Helping these people help themselves gives me great satisfaction. Giving money to individuals seems a more organic thing for me to do than putting a check in an envelope, addressed to an organization. I do some of that, but I so prefer pressing my money into the hand of someone whose smile blesses me in return.

In this week’s copy of Seattle’s “Real Change,” was the following article which warmed my heart, as I’m sure it will warm yours. 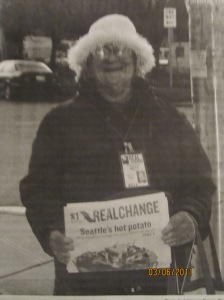 Vendor of the Week
Paulette Bade

Paulette Bade has an infectiously positive attitude. When I arrive to meet her, just past 8 a.m. on a chilly Monday morning, she’s already been selling the paper for over an hour. We can see our breath and the sidewalk where she’s selling is mostly quiet, but Paulette is all smiles. When she sees me, she exclaims that it’s so cold this morning she probably wouldn’t have shown up if she were me. I find it hard to believe; Paulette always shows up, 7 a.m., six days a week, without fail. She is happy to be selling a paper she believes in, talking with customers she knows and cares about, and saving money for her future.

Paulette has been selling Real Change outside the Whole Foods store at 64th and Roosevelt since the start of the new year, moving recently from her previous location at the QFC down the road. Luckily, staying in the same neighborhood, she’s been able to maintain a lot of her same customers–people who still stop by to visit with their favorite vendor and buy a paper once a week. When she started selling the paper–in 1999, incredibly–it was only to make some extra cash. Her ambition soon swelled, though, and she now sells more than 300 papers each month. Starting out, Paulette had been homeless for close to eight months, staying in a local DESC shelter. She eventually moved into Nickelsville, the only place that would let her keep her two cats and where she met her current boyfriend. The four of them have since moved into an apartment near the store.

“Now I want to put money in the bank. I want to do better for myself,” she tells me. Paulette has been saving up her earnings from selling the paper in hopes of moving into a better home, somewhere where they can have more space and the two kitties can roam around.

As we talk, customers leaving the store or walking by greet Paulette like an old friend. They know her well, and she knows them. She points out customers to me, telling me who writes poetry and who buys the paper for the crossword puzzles. She loves this part of the job, even with the uncertainty that sometimes comes along with it. “You never know from one day to the next how many you’re going to sell or how much you’re going to make,” she says. But even on slow days she powers through, reading the new issue each week, trying both to know her product and her community.

When I ask what her customers outside of Whole Foods mean to her, she is flushed with joy.

“I’m thankful to all my customers. I appreciate them just stopping by and saying ‘Hi.’ Their smiles make my day, everyday.”

Homeless Lessons Learned was produced by Andrew Diffee, a talented young college student majoring in videography. While looking for subject matter for a required video production assignment, Andrew and I crossed paths outside The Contributor office downtown. Intrigued by the details of my living situation, and my positive attitude and outlook in the midst of it all, he decided to tell my story. We arranged a shooting date on a Sunday afternoon, and armed with a film crew and a pizza, production began.

I have lived and survived the last 18 months in the woods on the back side of Fort Negley (coincidently named after General James Scott Negley). That makes me a veteran with an honorable discharge who has lived on a former military installation all while trying to establish himself in a new city. But on December 3rd, 2010, after a long, hard “tour of duty,” I finally moved into an apartment. (Selling The Contributor had a lot to do with that.)

Life is different when you have a roof over your head and a safe place to go. For me, that has become an achievement and a reality. But for so many of my dear brothers, sisters and friends, it is not within their reach at this point in time. I know what they are going through every night, night after night, with no place to go, no place to be. Wherever they try to lay their heads, they end up being either ticketed or incarcerated for trespassing.

During the entire 18 months I camped on that hill, I was never ticketed or jailed for trespassing. I did, however, have everything I own dragged down the hill and thrown in the back of a garbage truck–twice! (It’s much easier the second time.) I made it through Nashville‘s coldest winter in 30 years in a tent I built myself. I survived the flood of 2010 and didn’t lose one thing to the rising waters. I did whatever I had to do to make it happen, help my fellow-man, and survive. How I did it and what I learned over that period of time is the focus of Homeless Lessons Learned.

Armed with a plan to alleviate the plight of my brothers and sisters on the street, those who attend the screening will learn about ways they can get involved. I believe that 2011 is going to be a year of growth and change for a lot of folks. Things are going to get better. I have seen so much happen in 2010 and I know that we’re just getting warmed up. Things can’t stay the way they are. Justice must prevail for everyone. We are Americans! 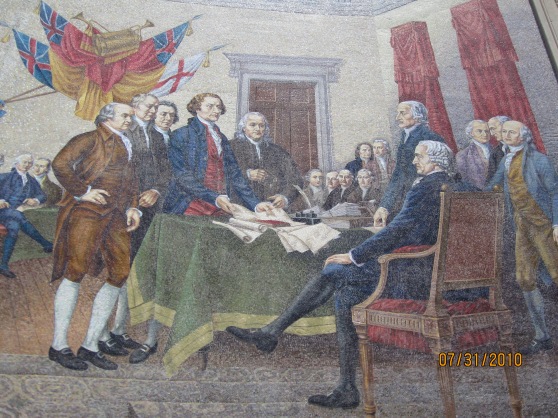 And more importantly, we’re family. Together we’re stronger–as individuals as a community, and as a nation.

a man with a story to tell…of compassion… for all…hugmamma.

Note: A public screening of Homeless Lessons Learned, a 45-minute documentary, was held on 1/12/11 at Nashville’s Downtown Presbyterian Church (DPC).