Just when the caterpillar thought the world was over,

it turned into a beautiful butterfly.

Can life get any better than that?

Two auditions down, one left to do.

While awaiting news of her Toronto audition for Ballet BC, my daughter did Hubbard Street Dance Chicago’s audition yesterday. While she made the first cut, one of forty dancers down from the 250 or so vying for one or two positions in the main company and another couple in the second company, she did not make the second cut which shaved the numbers by 30 dancers. Wanting to share the disappointing results, she called me as soon as she exited the studio.

I detected neither devastation nor ecstasy in the tone of her voice. She sounded chipper. I was hopeful, until she gave me the bad news. Except for her words, I didn’t pick up on any major catastrophe. Just the slightest trace of sadness. After all this was her dream company.

On her way to catch a subway back to her hotel, she seemed slightly out of breath as she explained the outcome.

My daughter felt okay at having lost out to phenomenal dancers. She mentioned a couple of the women, one already with Hubbard Street 2, and the other, a 31-year-old who’d danced with Milwaukee Ballet since she was 17. I’d seen the second one a couple of summers ago when she and my daughter danced with Textures Contemporary Ballet. The woman was amazing. And according to my daughter, the Hubbard 2 dancer “moved beautifully” as well.

As with any job interview, dance auditions are a roller coaster ride. Only the hardy get off in one piece, prepared to do it all over again. And that’s my daughter, ready to continue on with the ride of her life. One I would’ve ditched years ago. In fact, roller coaster rides lost their appeal for me after I did a handful of them way back in the day. Besides scaring the bejesus out of me, they made me nauseous.

It takes a certain mindset to survive roller coaster rides…the man-made ones and the ones manifested in our everyday lives. To survive we must establish coping mechanisms…give in or zone out. Either way we have to let ourselves…go with the flow.

On the subway ride, my daughter sat with another dancer who’d been cut from the audition. Both traded stories of where they’d been auditioning, and what they planned to do in the aftermath of this failed venture. It seemed the young woman was more despondent about her prospects.

We continued our conversation once my daughter was in her hotel lobby. We talked of her upcoming four days in Atlanta where she’ll be auditioning during company classes. Always the preferable way to have the director see her among his own dancers, rather than one of fifty in so-called “cattle calls.” Having trained and apprenticed with the company might also work in my daughter’s favor. I say might because six years have passed and there are lots of “other fish in the sea” who might be equally as good or better, as we’ve learned from previous auditions. There’s no guaranteeing who will succeed in being hired to fill the one or two openings available.

The other thing to consider is that unionized dance companies, Atlanta’s being one, must hold auditions even if they don’t have jobs to offer. I’m not sure what the rationale is for this rule. So even after dancers dole out money for head shots, airfare, accommodations, and registration fee…yes, they have to pay to audition…chances are the entire affair was a ruse. As a veteran of the business, my daughter only does auditions where jobs are available. She learns of them through her network of friends or is astute at seeking out companies with openings online.

Auditions are an excellent way for dancers to critique themselves. They see where they stand among their competitors. They learn what specific things they need to improve, perhaps to master, to better their chances of being hired. They can gauge first-hand what companies are seeking in prospective members.

On a personal level, auditions can be healthy doses of reality. Dancers learn if they’re made for a career that can be very fickle…at times based more upon subjective, not objective, criteria. Appearance matters, whether in the dancer’s look or the lines she creates while moving through the choreography. Directors know in their heads what they’re looking for. Too bad dancers can’t get inside those heads. It might be a lot easier to decide whether or not to even go through the motions.

I’ve been enamored of dance all my life. Growing up I just moved to whatever music was playing on the radio or TV. Except for the requisite hula classes…I’m Hawaiian, after all…I taught myself, and others, to do the popular stuff…the mashed potatoes, the twist, the jerk, the continental. An older sister used me to practice the cha-cha and the swing. 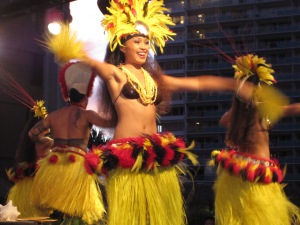 Ballet and I would never have seen eye-to-eye. I’m not one for standing still and moving my limbs. Not when I have no control over my body once the music begins. It grabs hold of me and throws me around like an out-of-control, deliriously excited rag doll.

My daughter is beginning to learn some of why dance appeals to me. Having decided to go more contemporary, she’s learning to take ballet to a new place. Allowing the body to sculpt the movement, rather than confining it within specific structures. Marrying both concepts creates beautiful movement, not unlike ballet in its finished form…on stage.

No matter the form it takes, dance is like magic effortlessly performed.