Scott Hamill is undoubtedly correct in siding with the Olympic judges who awarded the 2014 gold medal to Russian ice skater Adelina Sotnikova. After all, he and they are the experts.

I’m no expert, however I’m entitled to my own opinion. And in my opinion, South Korea’s Yuna Kim was more deserving of the top prize. 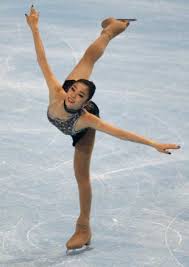 Sotnikova was, without a doubt, the more athletic of the two women. Aesthetics aside, for we all have our own preferences, the Russian competitor seemed to throw in as many jumps as she could muster beyond the two minute mark just to clinch Olympic gold. The beauty of ice skating went by the way side. All I saw were limbs flailing every which way as Sotnikova hurried  from one jump to the next. While I had been striving to apply some meaning to her movements, my efforts came to a sudden standstill when it became obvious that she was skating to beat the clock with all manner of trickery.

Kim, on the other hand, concluded a perfect free skate. Not only that but she was breathtakingly beautiful, exactly what one expects of a champion. She was not playing to the crowd, although she does that unintentionally. I’m certain the viewing audience on hand and at home held a collective breath, expelling it only minutes later in wondrous awe.

Watching the program with my daughter, we couldn’t help comparing the evolution of tricks as a mainstay for ice skaters and ballet dancers alike. The higher the jumps, the better. The more spins, the louder the applause. The standard of excellence has definitely undergone a transformation from the ice skating performances of Peggy Fleming to the current moves performed by Adelina Sotnikova.

In ballet we had Anna Pavlova…

For a very long time Anna believed that her technical proficiency was curtailed by her physical abilities until one of her teachers, Pavel Gerdt, told her, “Let others perform acrobatic tricks. The thing you consider to be a shortage in reality is a rare gift which singles you out from thousands.”

Anna graduated in 1899 at the age of 18, and her graduation performance in Pavel Gerdt’s Les Dryades prétendues (The False Dryads) was so successful that they were allowed to enter the Imperial Ballet Company. Anna Pavlova was accepted as a coryphée – a ballet dancer ranking above a member of the corps de ballet and below a soloist.

In the next several years she performed in such ballets as The Pharaoh’s Daughter, Sleeping Beauty, La Bayadère (The Temple Dancer) and Giselle. The public at the time was used to academic ballet performances, and Pavlova’s different style which paid little heed to strict academic rules made a splash. She could dance with bent knees, bad turnout, misplaced port de bras and incorrectly placed tours, but her amazing physicality and the spirituality of the characters she created delighted the public and impressed critics.

Currently, ballet schools and companies are placing a great deal of emphasis on tricks. Gelsey Kirkland, an acclaimed ballerina who now coaches touched upon the subject in an interview.

K: Are there any specific areas of technique you like to focus on?
G: The explosion in bravura technique over the past several decades has been fantastic and I would certainly like to learn some of those tricks! But other, more subtle areas of technique have perhaps been neglected. What I try to do is to see where the need is, and one of the needs seems to be in exploring and respecting the boundaries of classical port de bras and explaining it with an artistic perspective. I like to help people find the beauty inside the restrictions.

K: Can we talk about the training system in America?
G: I believe the American training in general is not rooted enough in European tradition. There is no national system of training, as in Russia, to prepare people for the great classics. A training system needs to integrate technique, style, mime, acting, character dancing, and historical dance. These things are essential to putting the puzzle together. The focus of today’s ballet training is often primarily athletic. Beautiful port de bras and épaulement however do not appear out of the blue. They need to be built into the training.

Athleticism and artistry should be given equal consideration in both ice skating and ballet. To give one more weight over the other is to favor one type of skater or ballerina over another. In sports that set themselves apart from football, basketball, soccer, hockey and the like, there is an expectation of finesse and refinement. More than that, ice skating and ballet at their best should involve the audience in a story. We should journey with the individual from beginning to end, swept along in their own personal adventure of excitement and hope.

I rode the tide of Yuna Kim’s ecstasy basking in the glory that should have been hers. I wasn’t so moved by Adelina Sotnikova who left me flat and wondering.

Storytellers abound. All we need do is pause, breathe deeply…and listen.

As with the story of an 80 year-old, deaf Canadian whose canvas is the sky and whose paint brushes are…kites.

His “artwork” draws applause…in the form of hands held high…so he can see and know…that an appreciative audience is thrilled by his artistry.

One kite in each of his hands…and one tied to his waist…the “artist,” skin leathery from hundreds of hours in the sun…”paints” like the great master he is.

The accompanying music combines to create…a beautiful ballet, whose movement…even my daughter would relish applying to dance.

Not being a true techie, but more of a wannabe writer, I’m totally amazed when I learn that my blog has actually been read by someone I know, or with whom I’m familiar. Case in point, my ongoing communication with Comcast which began with a national phone service rep commenting on my post, letting me know that I could contact him directly by email. That got the “snowball rolling.” Unfortunately, or fortunately, depending upon your point of view, mine is somewhere in the middle, our conversation continues since our internet connection is nonexistent. It’s been that way for 6 days. The technician who professed to the “noise interference” theory is returning to replace our antique modem with its current version. He’s also “changing out wires.” Those are his words; I’m uncertain what they mean, exactly. My husband will tail the repairman tomorrow, asking pertinent questions, I’m sure. I’m more the “leave them alone to do their thing” type; my hubby’s the “in your face” type. I’ll be holding my breath, crossing my fingers, arms, legs and toes, hoping against hope that COMCAST FINALLY FIXES THE PROBLEM!!!

Yesterday, as usual, I accompanied my daughter to Pacific Northwest Ballet’s adult, open class at its suburban campus. Our friend, Marissa Albee, taught. Throughout class I couldn’t help but admire her dance movement, in addition to her teaching style. Her attention to detail in technique and artistry makes her an awesome instructor. Sitting quietly in the corner, observing, I felt myself paying attention to her corrections, tapping her fingers on her breastbone to indicate “opening up to the audience.” When she stretched her leg, lifting the muscle up from beneath her butt, rotating it so that the hip wasn’t simply hiked up, but that her entire side was lengthening, I knew exactly what she meant. Of course, I’m anal about details. Remember the previous title of my blog, Hugmamma’s Attention to Detail?

Following class, Marissa stopped to chat. I expressed my genuine admiration for the manner in which she taught the ladies, and my appreciation for her beautiful, fluid dance quality. My daughter and I never had the privilege of seeing Marissa dance with PNB, probably because we weren’t yet living on the west coast.  But as we indicated to her, Marissa looked as though she could resume her career. Of course stamina might be a concern, because she’s not rehearsed and performed in many years. At least that was her reply to our suggestion that she could continue dancing. Then there’s the fact that she’s a doting mom, which is a full-time career in itself. I know that for a fact. So my daughter and I, and the ladies in Marissa’s class, are content to watch and learn from her. She’s still trying to get me into a leotard and some tights. That’ll never happen, unless I’m physically transformed into someone like Carla Korbes, PNB’s new principal, who’s an absolutely gorgeous dancer.

What floored me about our conversation is that PNB had emailed Marissa about my previous post. Someone on staff had read it, and passed it along to Marissa. So she thanked me for the nice things I’d written about her. The pleasure was mine, as it is in what I’ve written about her in this post.

The power of the internet is becoming more and more obvious to me, and frightening. Essentially anything we think, and express in words for all to see, exposes us. But the power to be “heard” is something to which we all aspire. Wielding such power to further compassion and a positive attitude, is my mission in blogging. We all have the power to make a difference, and the internet can be an important ally towards that end. Even one, lone voice can capture an audience’s attention if there is value to what is being shared. I’m just regurgitating what my Blogging 101 instructor, Cat Rambo pointed out one day in class.