My daughter sent along this photo of my grandkitty, a little fella who tugs at my heartstrings every time I see him…in person…or in print.

I think he’s trying to tell his mom that he misses me…his blogging hug-grammy.

And that she’d better get him on a plane headed this way…quickly!

Even though the last time we all flew to take he and his mom back to where they lived…he pooped in his crate.

Having rented a condo for a couple of nights until our daughter’s apartment was ready for her to move into, she and I had to bathe my poor, miserable grandkitty in the shower.

Imagine a cat with water pouring down from high above, while two humans he thought cherished him scrubbed every nook and cranny of his body unmercifully. Well, it was more like my daughter holding him, while I did all the pulling, tugging, and scrubbing…making sure not a smidge of feces was left in his long hair.

So then we had to leave him holed up in the bathroom so that anything I hadn’t manage to scrub off…didn’t smear off onto the condo furnishings.

Although the night before, I did insist we buy a little, soft fabric house in which he could hunker down and hide. And that’s where he remained until we felt it was safe for him to join us in the rest of the over-sized studio.

Of course I had packed his litter box, some litter, the poop scoop, and some food…wet and dry…in my suitcase. So he was good to go…kind of.

As you can see, the “little man” has acclimated to his home of less than a year quite nicely. In fact, he’s back to his ornery self.

…no doubt about it.

(Move your “mouse” across each photo to read the caption.)

“Busted out of prison. Finally!” 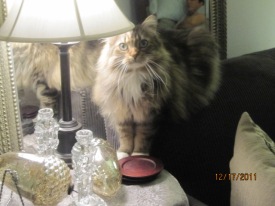 “What you staring at?”

“Sometimes I just like to sit on…my fat behind.”

(Go to the following for other…PET SHARES by MICHELLE
https://hopethehappyhugger.wordpress.com/2015/01/27/weekly-pet-share-round-up-and-start-of-new-week-73/

19 thoughts on “michelle’s pet share: a little levity…from my grandkitty”