Looks like the Republicans are getting ready for a knock-down, drag out presidential convention in Cleveland, Ohio this summer.

Trump is the designated people’s nominee, while behind-the-scenes the establishment is scrambling to offer up its own candidate. It might be that we’ve only seen the tip of the iceberg with respect to the sporadic bullying which have broken out at Trump rallies. His cult following is ready to take it to the mat with anyone who gets in the way of their idol, as he takes over the White House…Trump’s own D.C. Miralago.

With Mitch McConnell’s refusal to consider the President’s Supreme Court nominee today, it is apparent that Trump’s followers are spot on in thinking that Washington is broken. As long as established Republicans continue to face off against anyone with whom they disagree, nothing of worth is accomplished. Their own Speaker of the House Boehner threw up his hands in resignation, and quit the political scene altogether. It’s not that they can’t get along with Democrats, Washington Republicans can’t even get along with their Tea Party branch of conservatives. Time and again Trump has said that Ted Cruz is unable to work with his fellow congressmen and women.

The battle that ensued within the confines of Capitol Hill in D.C. has erupted onto the streets of small town USA. It was long overdue. The Tea Party, backed by billionaire brothers Charles and David Koch, was going to eventually overwhelm the Republican establishment. It was just waiting for the right man in the form of a billionaire whose agenda paralleled theirs in returning America to…a patriarchal, isolationist society, favoring white men.

If Trump is denied the presidency by his Party’s hierarchy, he threatens anarchy on the part of his followers. So it seems the Republicans have opened their own Pandora’s Box and are unable to contain the tornado it unleashed. Like a Jack-in-the-box, Trump keeps bobbing up and down avoiding the poisoned arrows hurtling his way. As a boomerang returns from whence it came, Republicans never figured on having opportunist Trump bum a free ride to the highest office in the land and the most powerful position in the world…at their expense. All the while…

…blasting the Party to smithereens. 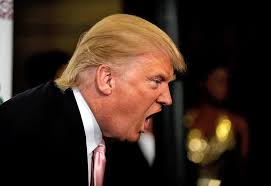